In Uzbekistan, textiles were always the key decorative element in a home, as there was hardly any furniture to speak of. This not only applied to nomads in their yurts but also to people living in cities and towns. The custom was to sit on the ground, with a long, woven piece of cloth, the dastarkhan, serving as a table. Embroidered bags, known as napramach served to store various items, such as mattresses consisting of various quilted, padded and/or upholstered quilts, known as kurpas. Occasionally a small cupboard or side table might have been used on which to place a teapot, but that was all. The walls were preferably painted with intricate designs and furnished with small alcoves to display the inhabitants’ most prized items, rather like a display case. Sometimes a curtain, a kirpich, was hung in front of it. The blankets used as mattress were stacked in large piles, known as chuk, according to the rule: “The higher the pile, the more wealthy the inhabitants, the greater their prestige, and the less cold they will have to endure.” Consequently the chuk was eagerly embellished with decorative borders and tassels. Kurpas were always made from different materials – once again, to confuse the evil spirit(s).

Before the advent of state-run textile combines in the Soviet era, kurpas were made from handmade ikat textiles, some backed with fabrics imported from Russia, others completely fashioned from these expensive, imported textiles. Later they were made exclusively with machine-made textiles from the kolkhozes, the reasonably priced ikat prints being particularly popular. The blankets were predominantly filled with cotton fleece, but were also used without the padding.

Frequently these blankets were also decorated with patchwork, known as caroq or kurok. If one considers the Central Asian taste in textiles and Muslim background, then the inclination to apply patchwork in any form seems to be a natural progression, starting with the various printed textiles lining the coats known as chapans and ending with the oversized caroqs, that are so bedazzling that they are bound to thoroughly discombobulate the most evil of spirits. The dark forces bringing sickness and death are so distracted by these crazy patterns that they fail to spot the human beings lying on top of and between them, and are thus prevented from bothering them. Therefore we’re safe on patchwork blankets and can sleep in peace – at least that’s the general belief in Uzbekistan.

It stands to reason that caroqs are frequently used for cradles and children’s clothing, as the little ones need to be protected in particular. Windows and doors are also adorned with talismans to ward off evil spirits. As the belief was that fabrics can also transfer positive energy, talismans also incorporated small snippets of garments worn by people whose powers one wanted, such as that of a women who had had many children, a person who was particularly wise, or a brave warrior. This belief was particularly strong in rural, nomadic regions.

Of course these elaborate, tactile pieces of art also exhibited the skills and talent of the designer, important features for a future bride to have, as the good name of her entire family was at stake. Brides would create their trousseau in the time between her wedding and moving into her new home. At the end of a wedding ceremony, frequently fabrics used for the trousseau were given to the guests for their own caroqs. This allowed them to stay connected, and also pragmatically allowed guests who were unable to attend to be a part of the event in a small way.

The blankets from the late 19th to mid 20th century are collections of old Russian printed textiles and delicate ikats, which were invariably incorporated together with monochromatic triangles in black or white into an overarching design. The triangular shape refers directly to the doga, one of the most popular protective talismans of this culture. They are frequently sown next to each other in long swathes, true to the motto: “The more the better.” This is the same triangular shape used in American quilts known as “flying geese”. However, the American version is surely used for decorative purposes, to create more graphic variety and has no spiritual basis like patchworks from Central Asia. Anyone who has experienced the monochrome, beige-coloured countryside of Uzbekistan or Central Asia will understand the desire to shroud oneself in colourful fabrics a little better.

Pictures right, from top to bottom:

1. The high staples of blankets (Chuks) point on the high status and wealth of the family. Besides they had a radio, a record player and a samovar. Max Penson around 1930/40.

2. Inside the city museum of Chiva. Today they discoverd synthetic pannesamt for the home textiles.

4. This is how it could look to live with a minimum on furniture. (City museum Chiva) .

5. Interior of the ethnologic museum in Tashkent.  Who could afford it, uses the patchwork principle also with the interior decoration.

7. In the 60ies and 70ies these faux ikats were very popular. This piece is a curpa with some flower prints on the backside.

8. The love of patterns and very fine mosaics is next to the love to the patchwork. Every pattern fit together. Here the entrance of a mosque in Samarkand.

Pictures, left side, from top to bottom:

9. Even a “modern” furnishing with table and stools needs a CHUK ! Max Penson, around 1940

10. In Uzebekistan the design concept of mosaic and patchwork do not stop in front of a cupcake. Here at the market in Samarkand.

11. „New way of life“ is the name of the picture Max Penson made around 1940/50er. Reading newspaper, using a samovar and eating from big pates. And staples of curpas almost to its ceiling.  To us it gets well and we are rich ! 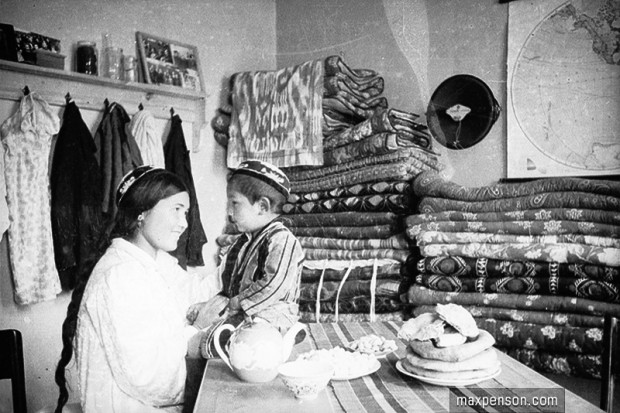 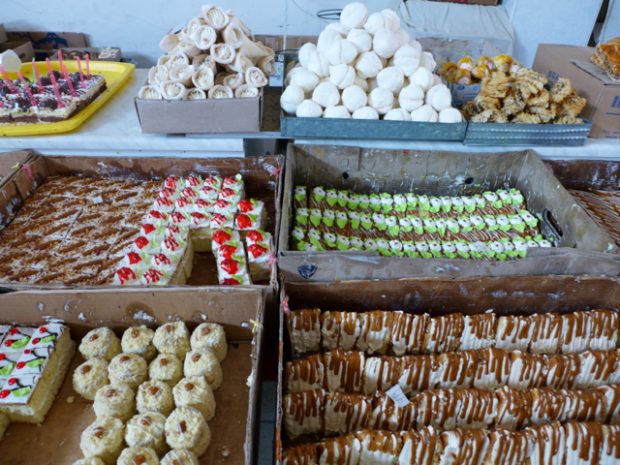 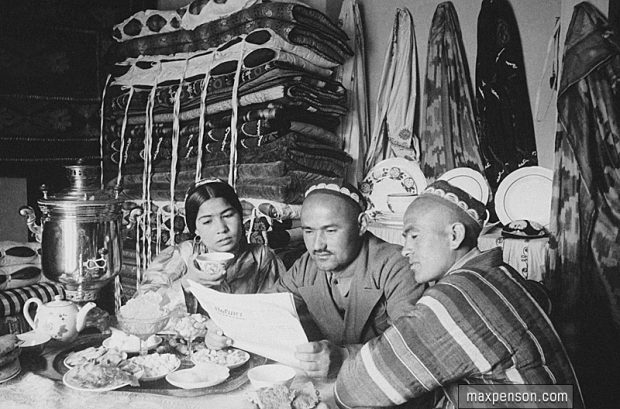 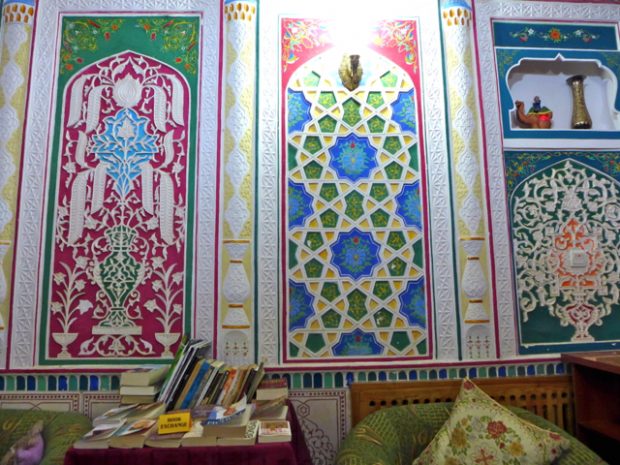 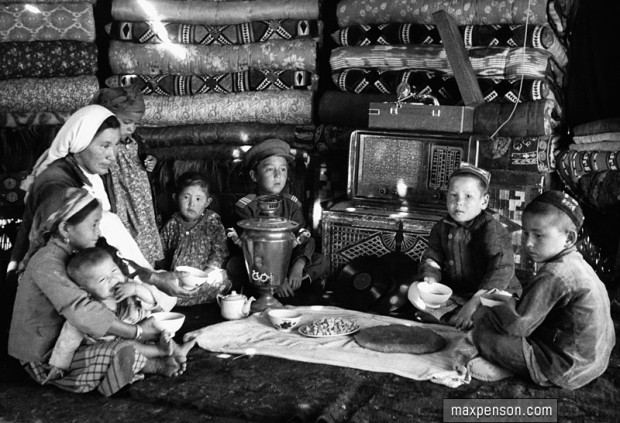 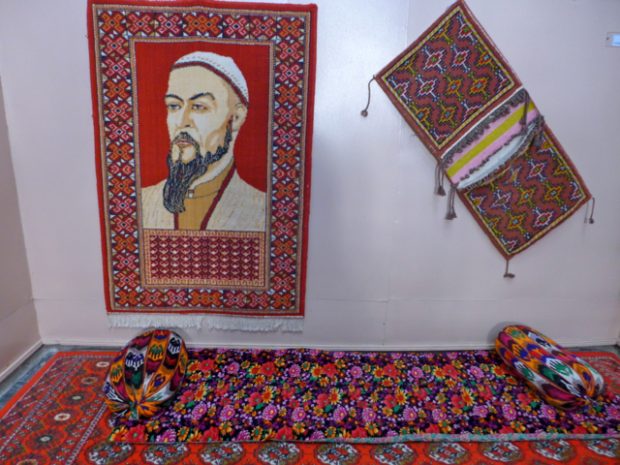 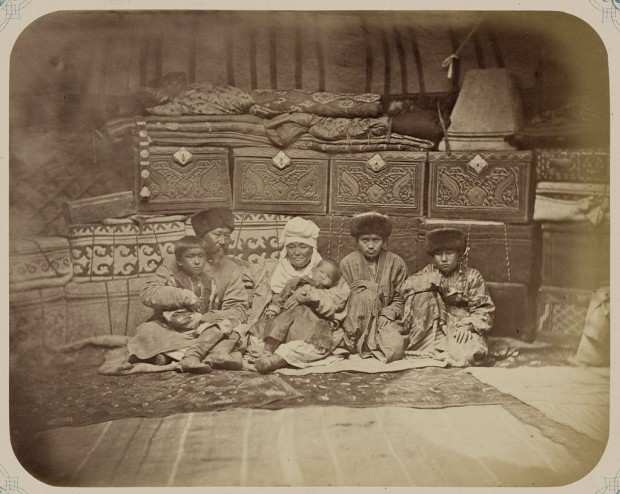 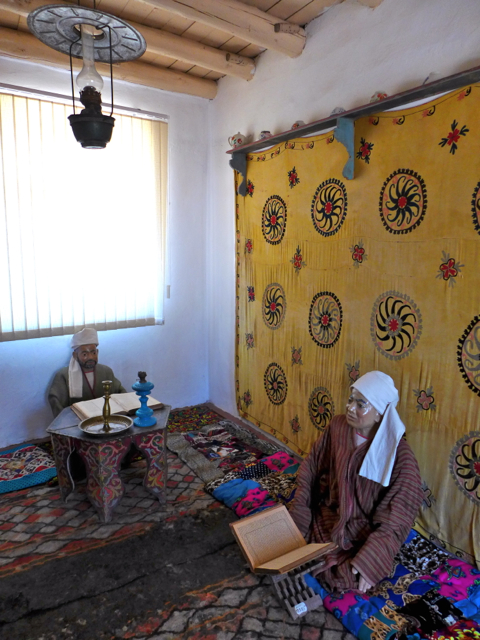 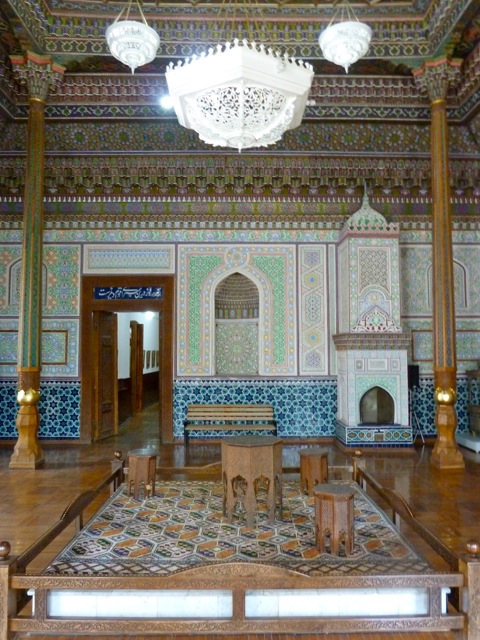 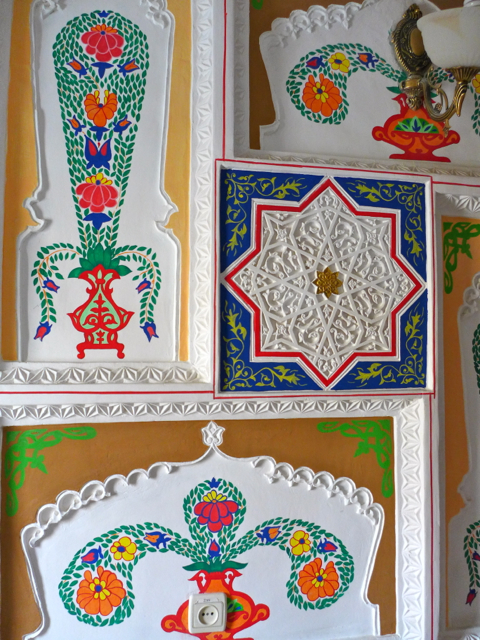 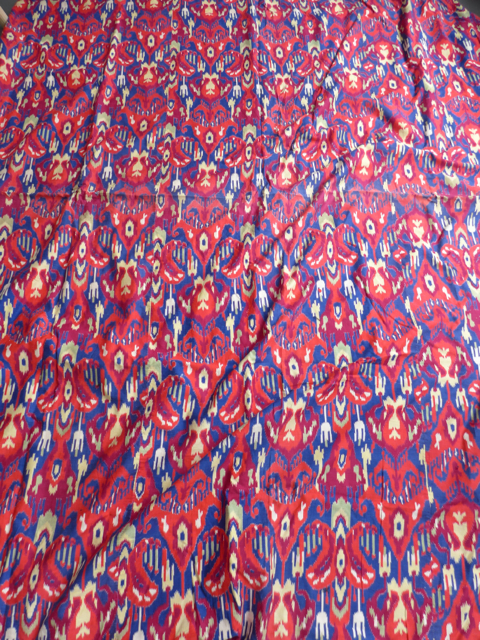 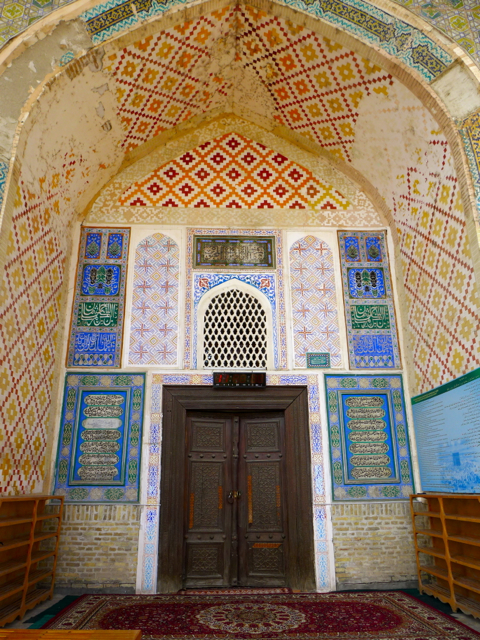