Folk costumes from the Kalotaszeg region in Western Transylvania are among the “Top Ten” of Hungarian costumes due to their design and colour and the love of opulent decoration, sheer beauty and expert craftsmanship that they reflect. The strikingly elaborate yet harmonious embroidery, the constructivist designs on each piece of clothing and the interplay of volume and straight surfaces all make these costumes so special. They flamboyantly express the pride and self-confidence of the wearers.

As Hungarians in the diaspora, the people of Kalotaszeg have managed to retain their identity by cultivating and keeping alive the knowledge on which their folk art and costumes is based – quite an achievement, considering that they have been living in a multiethnic state for centuries, together with Romanians, Széklers, Germans, Rom and Sinti. However the Hungarians living in Romania are anything but nationalistic, in marked contrast to their Hungarian countrymen.

As western influences were quite late to infiltrate this part of Transylvania, the folk costumes of Transylvanian Hungarians retain something very old and primordial. Influenced by the Romanians, they frequently lack the often tooth-achingly sweet lustre of Hungarian costumes. Instead, one finds great enthusiasm for geometry and clarity, which attractively complement the florid Hungarian garments and textiles.

The attire favoured by Transylvanian Hungarian women consists of a blouse, several underskirts covered by a pleated skirt and apron, an embroidered waistcoat, and, in winter, a boiled wool jacket and large headscarf. Then there is also a belt, shoes, a handkerchief and jewellery. In Kalotaszeg the women usually wore chic red boots made of goat leather.
Before marriage, eligible young girls were permitted to wear a párta, a richly decorated crown made of pearls. Once married, their headwear consisted of a black bonnet with foldable ear flaps.

The way Kalotaszeg costumes play with volume is most noticeable in the blouses for older women, embroidered in contrasting colours of orange or black, the designs of which are selected according to the wearer’s age. The striking visual impact is achieved by the exaggerated balloon-like sleeves and heavy gathering at the collar. The key items of clothing worn by Kalotaszeg women are a skirt and apron. Many older women still wear wide, patterned skirts with aprons, in a modern take on the old national costume. In popular belief, these aprons play an important role: after the wedding ceremony, the bride would carefully store the apron, so that if a child fell ill she could wrap it in the apron, a custom believed to hasten recovery. Aprons worn only on special holidays deserve a special mention, as they were much more elaborately embroidered and decorated and displayed over a multitude of skirts worn simultaneously. Levels of adornment vary, depending on whether it is a normal visit to the church on Sunday, a lesser holiday or a high holiday such as Easter or Christmas. Some older aprons were made of hand-woven canvas, but mostly they have lavishly embroidered waistbands and are tightly pleated and edged with lace and ribbons. The colours, materials and choice of trimming are an indication of the (female) wearer’s age: up to 40 = red or yellow, between 40 and 60 = green or blue, and 60+ = black. This kind of colour coding also applies to the overskirt, a relatively modern item that women started to wear towards the end of the previous century. Girls wear red overskirts, brides blue ones, and older women black.

For men the most important item of clothing was the szűr, a mantle of Asian origin made of felted wool, which can be traced back to the Persian Invasion almost 2000 years ago. The szűr protected the wearer from the sun and wind, and on cold nights shepherds would use it as a blanket and pillow. This all-purpose, lavishly embroidered garment was worn to church on Sundays, and to weddings as well. Young men from Kalotaszeg wore embroidered, black leather waistcoats, white culottes made of cotton, with a light-coloured apron decorated with floral prints. These garments are still worn on important occasions!

Know more about the folk art from kalotaszeg.

1. The construction of the skirt without apron.

3. Group of young men with apron and vest. photo. Erdödi Mihály, Körösfö and Kalotaszeg 1940. From the archive of the museum of ethnology in Budapest. Neprajzi Museum Budapest.

5. An apron for the marriage from the second quarter of the 20 century. 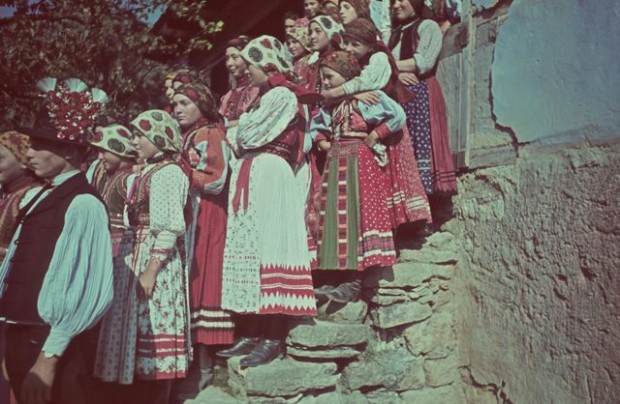 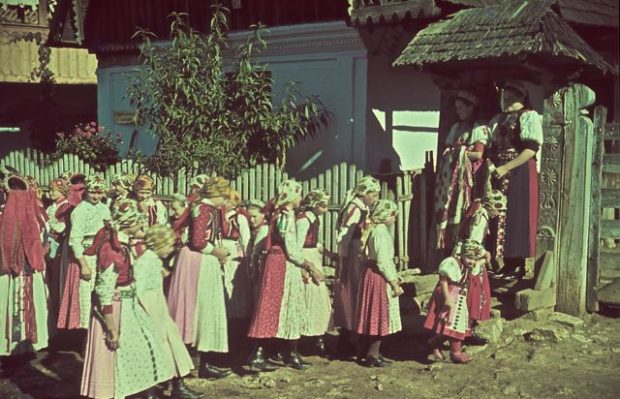 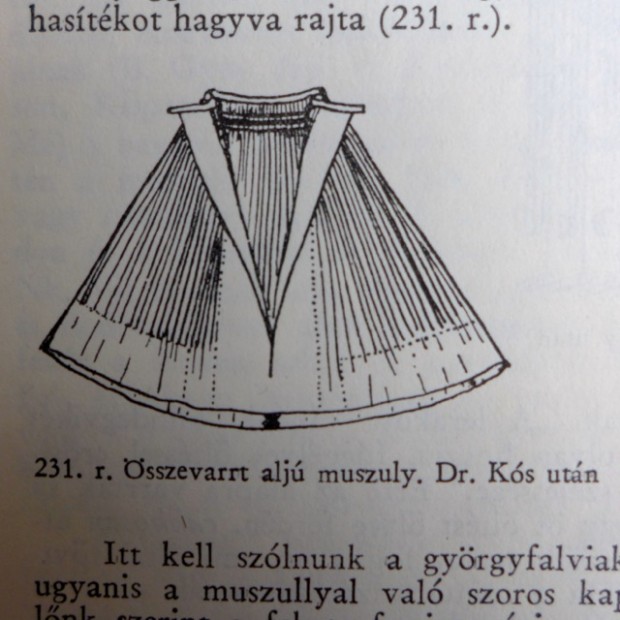 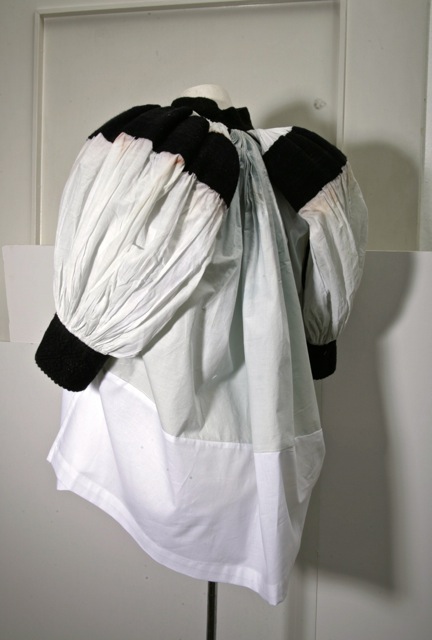 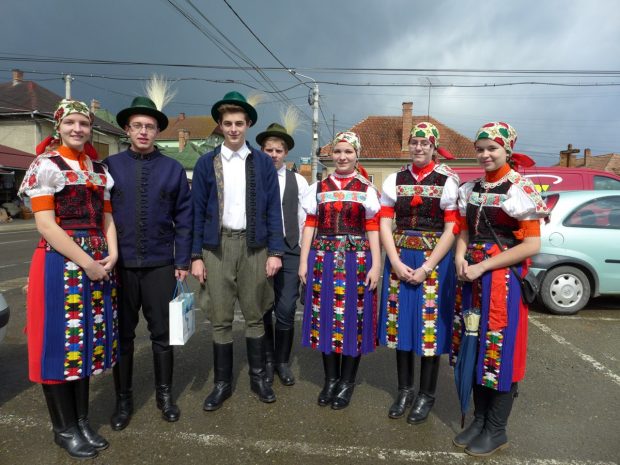 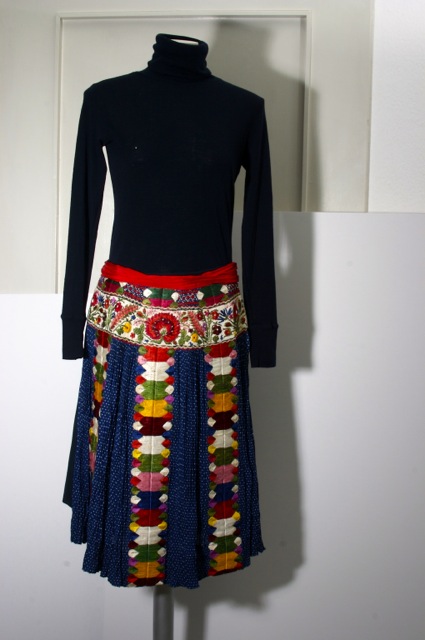 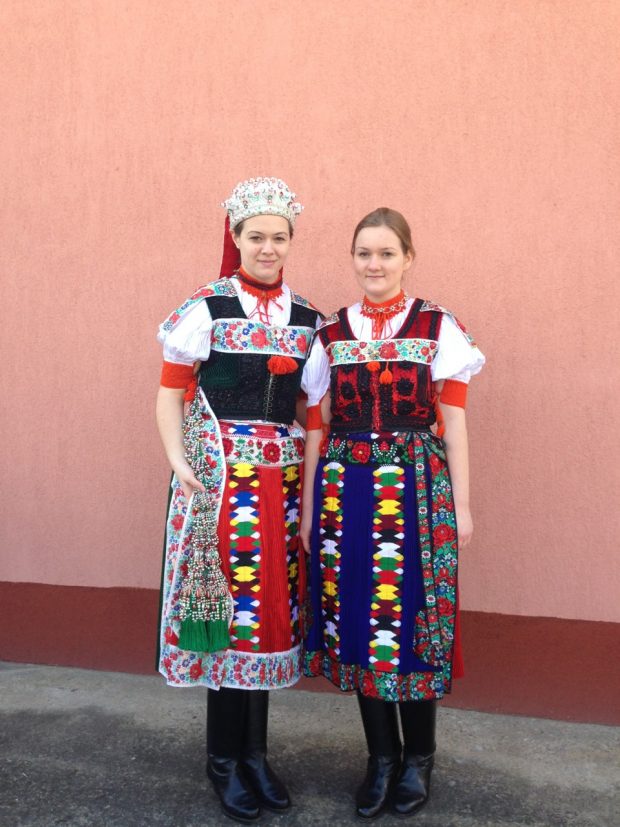 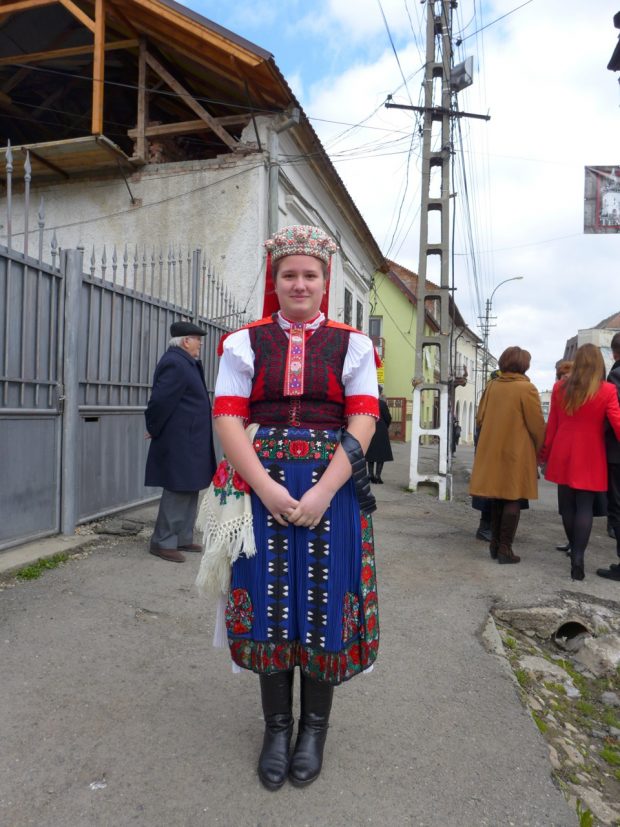